3D printing is no longer a nascent technology. It is used in prototyping, for industrial parts and even in space. But despite all the excitement, it has one major drawback: Its speed. A team of researchers now demonstrated that it is possible to speed up the printing process dramatically – depending on the object by between 25 and 100 times. 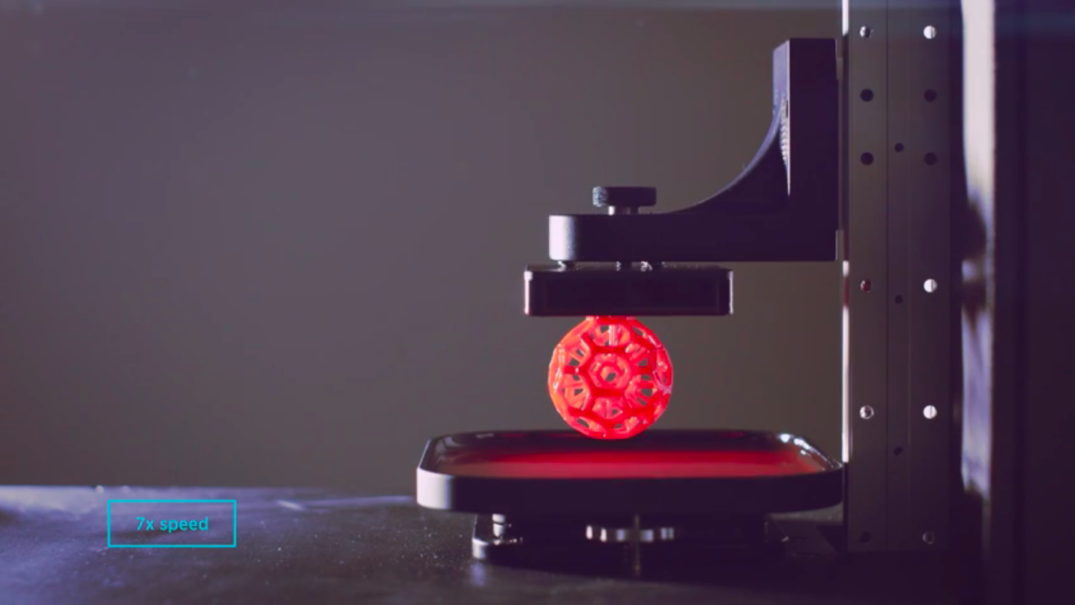 3D printing is no longer a nascent technology. It is used in prototyping, for industrial parts and even in space. But despite all the excitement, it has one major drawback: Its speed. With existing technology, it takes painstakingly long to print a small gadget, let alone bigger structures such as engine components or sports equipment. A team of researchers led by Professor Joseph DeSimone, Professor Edward Samulski, and Dr. Alex Ermoshkin now demonstrated that it is possible to speed up the printing process dramatically – depending on the object by between 25 and 100 times.

The California-based company Carbon 3D developed a technique called Continuous Liquid Interface Production (CLIP) that uses a balanced interaction between UV light and oxygen to grow objects from a pool of resin. The technique has its roots in the early days of 3D printing when a process called stereolithography was invented in 1986. Stereolithography uses ultraviolet (UV) light to cure plastic into the desired shape. In an advanced and much more complex process, Carbon 3D turned stereolithography on its head so that the object virtually grows from the bottom up. As Carbon 3D explains on its website, at the heart of the CLIP process is a special window that is transparent to light and permeable to oxygen, much like a contact lens. The explanation continues: “By controlling the oxygen flux through the window, CLIP creates a “dead zone” — a thin layer of uncured resin between the window and the object. This makes it possible to grow without stopping. As a continuous sequence of UV images is projected, the object is drawn from the resin bath. Sophisticated software manages the entire process by controlling the variables.”

Carbon 3D performed a time trial with a 51mm diameter complex object that was printed on commercially available 3D printers using different methods and on a CLIP printer. The result was unambiguous: While it took 6.5 minutes to print the object using CLIP, it took 3 hours, 3.5 hours and 11.5 hours respectively to print it using Polyjet, SLS and SLA technology, according to 3D Carbon. The scientists and founders of 3D Carbon are clearly convinced that their method is a real breakthrough: “Current 3D printing technology has failed to deliver on its promise to revolutionize manufacturing,” said Dr. Joseph DeSimone, CEO and Co-Founder, Carbon3D in a statement. “Our CLIP technology offers the game-changing speed, consistent mechanical properties and choice of materials required for complex commercial quality parts.” He is not alone in its enthusiasm.

“If 3D printing hopes to break out of the prototyping niche it has been trapped in for decades, we need to find a disruptive technology that attacks the problem from a fresh perspective and addresses 3D printing’s fundamental weaknesses,” said Jim Goetz, Carbon3D board member and partner at the venture capital firm Sequoia. He sees great potential in the technology, which is why several venture capital firms are backing Carbon 3D, which was founded in 2013. The company has already raised 40 million USD to commercialize the technology from several investors, including Northgate Capital and Sequoia Capital.