Adorning walls with custom-made designs has been a tedious process involving stencils and steady hands. Design student Benjamin Loinger at the technical university Johanneum in Austria wanted to improve the process. He finally came up with the idea of creating a mobile wall printer that can be controlled with a tablet, laptop or smartphone. 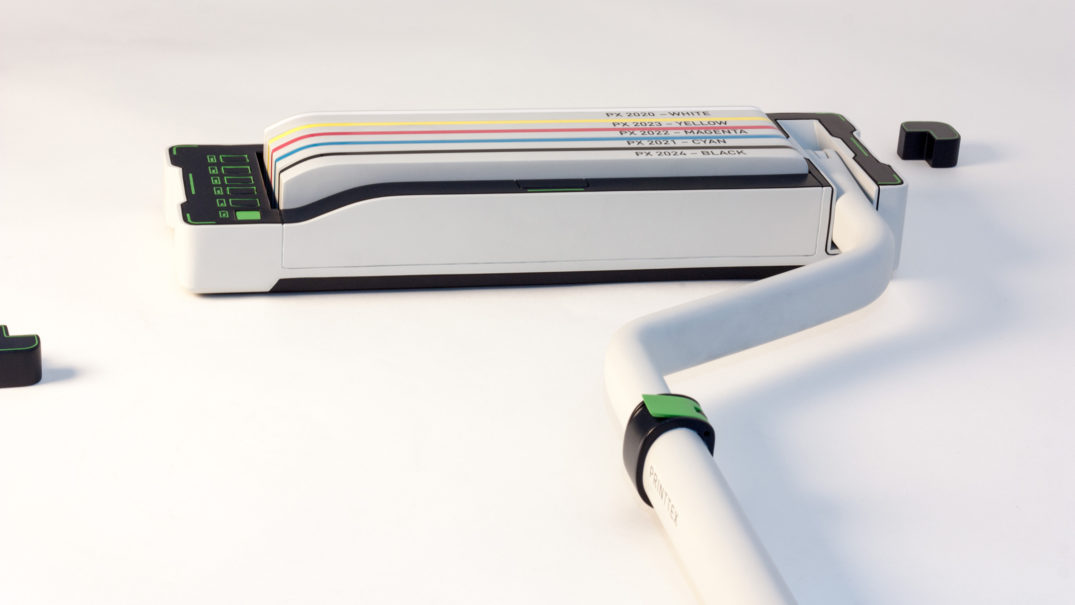 Adorning walls with custom-made designs has been a tedious process involving stencils and steady hands. Design student Benjamin Loinger at the technical university Johanneum in Austria wanted to improve the process. When faced with the task of developing a new tool for the year 2020 in one of his classes, he didn’t want to create a conventional tool like a drill or a screwdriver.

“My goal was to find a new market niche”, he said in an email interview. “After a long phase of trying and dismissing ideas, I finally came up with the idea of creating a mobile wall printer”, he said. He knowledge from his training as a graphic designer helped him to develop new technical solutions to transform his idea into a product. At first, Loinger considered different printing techniques, including pad printing, but found that this technique would limit the size of the printed object. That’s why he decided to print directly onto the wall. After a series of technical and ergonomic assessments, trials and prototypes, he decided to use a device resembling a paint roller with a telescope arm and a large print head.

The printer can be controlled with a tablet, laptop or smartphone to upload and transfer the desired design onto the wall. The printer aligns and prints within a selected area. Each color tone is printed separately. Two sensors on the edge guide the printer and ensure precise printing. The greatest challenge in the project was for Loinger to formulate the concept and to develop an appealing design. He succeeded in both and convinced the judges of the 2015 IF Student Design Awards who found his design showcases the “intelligent use of the inkjet technology.”

The judges wrote: “This wall printer opens up totally new and virtually endless options for digital printing. It has a downright inspiring effect! A great concept, implemented in a very expressive way.” Loinger’s wall printer was selected from almost 12,000 entries from students all over the world as one of the eight winning concepts. Loinger is still happy with the almost unlimited possibilities in terms of motives and areas where the printer can be used. So far, he doesn’t have any commercial partners for his project but is definitely interested in developing the concept further. For Loinger, the walls clearly represent no limits but limitless opportunities.